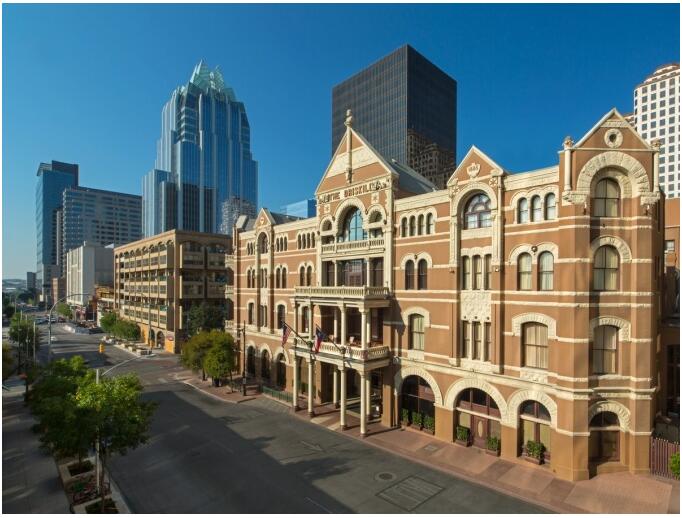 Not only music lovers are enthusiastic about the capital Austin. The self-proclaimed “Live Music Capital of the World” is probably the most liberal city in the state. Students and politicians meet musicians and actors here. Countless clubs in the downtown area invite you to enjoy live music of all genres in the evenings.

Despite its rapid growth, Austin has retained its gentle, small-town charm. While history buffs will head to the Lyndon Johnson Presidential Library and Museum, sports and nature enthusiasts can hang out in the numerous parks and indulge in their passions – everything from golf to hiking to canoeing is possible in Austin.

The city with the sympathetic motto “Keep Austin Weird” is also popular with business travelers. Austin has one of the most technically well-equipped convention centers with numerous hotels within walking distance. The JW Marriott conference hotel, for example, has over 1,000 rooms and a flexible event area of ​​over 10,000 square meters. Austin has a population of 656,562.

The city’s landmark is the State Capitol . South Congress Avenue is one of the hippest meeting places in Austin: trendy shops, restaurants, hotels, art and music venues are lined up here. The “Bat Colony” under the Congress Avenue Bridge is also extraordinary: every summer, the largest urban bat colony in North America gathers here.

Texas’ liberal capital Austin impresses with its unconventional shops and hip boutiques , which can be found on South Congress Avenue or in South Lamar, for example. In addition, Austin also has a large number of shopping centers and outlet malls that leave nothing to be desired.

The city has almost 200 stages that turn night into day with their performances from the country and alternative scene and justify the title “ Live Music Capital of the World ”. No other American city has such a density of music clubs and concerts as the American capital of live music.

But even aside from the great music offer, Austin shines with travelers. The city’s surroundings, which are characterized by picturesque mountains and rivers, are ideal for a wide range of leisure activities , such as swimming or canoeing. Nearby Lake Austin is a popular destination for water sports enthusiasts.

Austin is not only at the forefront in the entertainment industry. Austin is also home to the University of Texas , one of the best state universities in the United States, known as a Public Ivy. The university with its more than 50,000 students makes Austin a very young and lively city.

If you pay a visit to Austin, despite the big city flair, you don’t have to do without a dip in the cool water of a natural pool: The Barton Springs Pool in the middle of the 144 hectare Zilker Park is fed by an underground spring. In the past it has already attracted a wide variety of social classes. Politicians met here to philosophize about new bills and in the 1970s Barton Springs became a meeting place for free spirits. The area around the springs offers a protected habitat for animal species such as the endangered Barton Springs salamander, which only occurs here.

One of the most popular and impressive swimming spots in the Texan interior is the Hamilton Pool , which is tucked away in a nature reserve near Dipping Springs.

Legend has it that the Hamilton Pool in Dripping Springs, west of the Texas capital Austin, was discovered by the son of a German immigrant family named Reimers in 1880. The same family recognized the recreational character of the bathing area and made it accessible to the public. In 1990 the area, which now bears the name Hamilton Pool Preserve, was declared a nature reserve and is now home to numerous native birds, fish, animals and plants. The Hamilton Pool, one of the most popular and impressive swimming spots in the Texas interior, owes its existence to a river whose ceiling has collapsed. Depending on the water level of the Hamilton Creek tributary, a 15 meter high waterfall falls into the grotto and feeds the bathing lake.

To be a superhero for once: this childhood dream has come true at the world’s only stunt ranch , a 30-minute drive from Austin. The Event Center on almost nine hectares is the backdrop for action-packed film shoots and a forge for one-day stunt men and women. As part of an Action Hero Training Day, in addition to the basics of pyrotechnics, numerous stunts and background knowledge about special effects in film and television are on the program.

The NLand Surf Park, southeast of Austin, has saved Texan surfers from having to travel to the coast for several hours since October 2016. The first inland surfing spot in North America with its lagoon appeals to surfers of all levels: from light waves for children and beginners to head-high waves and 35 second sessions for experts.

The Surf Park is a pioneer not only in the technological and sporting but also in the sustainable area. Because: the almost six hectare large lagoon with a capacity of over 41 million liters is fed by rainwater.

Circuit of the Americas

The ” Circuit of the Americas “, located southeast of the city and about fifteen minutes from the Austin-Bergstrom International Airport, offers much more than a race track in addition to the Formula 1 races that have been held here since 2012 .

This system, specially developed for Formula 1 races, was also built as a multifunctional complex. A conference center with a capacity of 500 people, a first-class banquet hall for groups of 250 to 1000 people, 14 two-story meeting suites, the “Grand Plaza” with an observation tower and open-air stage for live was created on the 375 hectare site -Concerts for up to 15,000 visitors as well as a go-kart track. This means that the area can be used all year round for events, congresses, sports and music events and offers Austin and its guests a unique opportunity for events of all kinds. 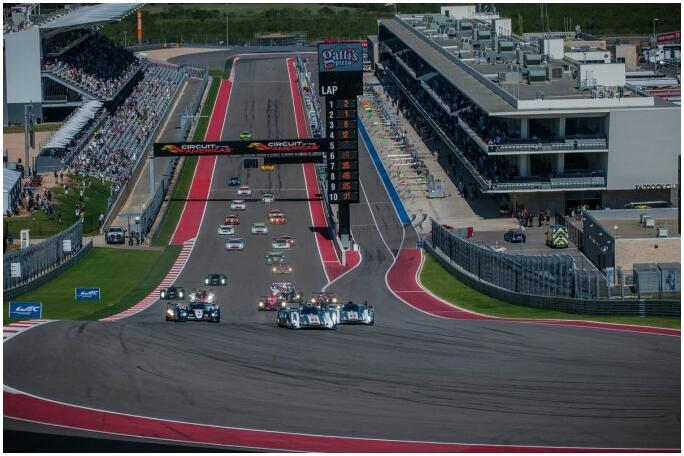 Barbecue in the Japanese pub

The Texas capital Austin has been bringing fusion cuisine to its peak since January 2017. In the Kemuri Tatsu-ya restaurant , the owners and chefs Tatsu Aikawa and Takuya Matsumoto combine Japanese food culture with Texas barbecues . Kemuri Tatsu-ya, which opened in January 2017, is housed in an izakaya, a traditional Japanese pub, which has been supplemented with Texan elements. Aikawa himself came from Tokyo to Texas at the age of ten, where his family found a new home in the small town of Elgin on the Texas Barbecue Trail.

Out and about on the Texas BBQ Trail

Barbecue has a long tradition in Texas. In Texas, barbecue stands for lifestyle and identity. Above all, beef and pork specialties end up on the grill. Of course, hearty sausages, which owe their arrival to Texas to the many German immigrants of bygone days, should not be missing.

Not infrequently referred to as the Texan national sport, barbecue is a way of life. Southeast of Austin, five parishes have come together to form the ” Texas BBQ Trail “. The grill route connects the places Taylor, Elgin, Bastrop, Lockhardt and Luling, which share the great passion of the Texans: the barbecue.

On the Texas BBQ Trail, friends of delicious grill specialties can put together their own route from restaurant to restaurant. Here everything revolves around steak, ribs & Co. at various large and small barbecue championships and festivals.

Part of the Texas Barbecue Trail is the Taylor Café in the small town of the same name. It is housed in the oldest building in the city center and serves guests its specialties in a cozy atmosphere. Families come from all over the area to chat, dine and toast.

In Elgin , the “Sausage Capital of Texas”, the former recipes of the German ancestors are still used today. Here Meyer’s Elgin Smokehouse makes a decisive contribution to the title of sausage capital Texas, because the grilled food is still prepared according to the German recipe that Henry Meyer brought from Germany to the USA in the late 18th century. Barbecue fans can also stop by the South Market .

The village Lockhart was appointed by the 76th Texan legislature the official barbecue capital of the state. Black’s Barbecue has dedicated itself to this culinary art for more than four generations . The mostly very large pieces of meat are slowly cooked at a moderate temperature in a so-called barbecue pit, a closed grill that is reminiscent of the pits in the ground in which the meat was smoked over glowing charcoal in the past. The family pub, which was founded in 1932, is considered the oldest in Texas.

The Kreuz Market in Lockhart, which has been in operation since 1900, has its very own stance and thus preserves old traditions: no forks, no salad, no splash of barbecue sauce finds its way onto the plate. The Texan art of grilling stands or falls with the smoke, which gives the meat its actual aroma. In this family business, barbecue sauce is seen as blasphemy that only conceals what is not good and tasty. The reality is different, however, as Texans love their sauce and every family keeps their recipe like a secret. As early as 1937, the most important ingredients of the Texas barbecue sauce were recorded in the Dallas Morning News: vinegar, water, butter, black pepper and cayenne pepper, ketchup or tomato sauce and Worcester sauce. 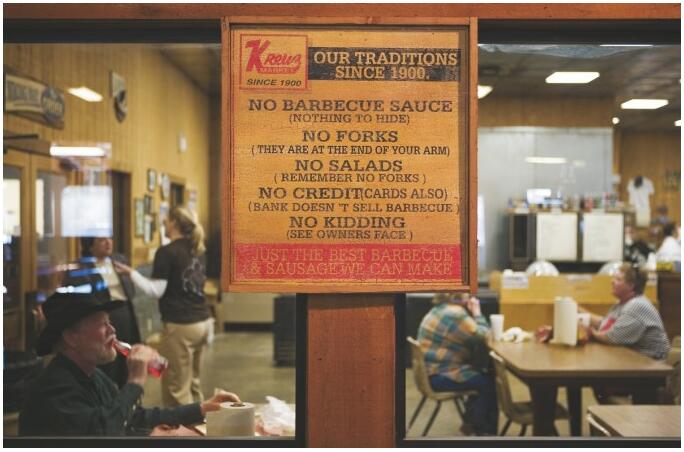 The Luling City Market, on the other hand, prides itself on serving its visitors so tender meat that they don’t even have to chew.

The Driskill Hotel in the Texas capital Austin gives you goose bumps. The stairwell of the hotel is said to be haunted by a young woman who died here in 1887.