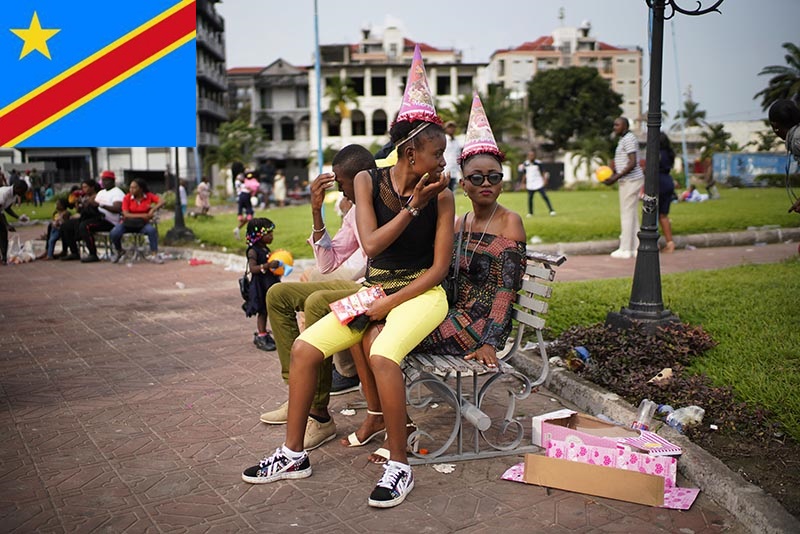 Democratic Republic of the Congo is a country located in the region of Central Africa. See abbreviation for Democratic Republic of the Congo. Congo-Kinshasa was ruled in 2001 −2019 by Joseph Kabila, who took over power in the midst of a fiery war. But despite peace formally prevailing since 2003, the Congolese have not experienced the calm they had hoped for. Kabila’s government became increasingly authoritarian, corruption continued to be a difficult problem and the civilian population was still subjected to brutal violence. Kabila managed to stay in power by postponing planned elections several times. The presidential and parliamentary elections were finally held in December 2018. UDPS leader Félix Tshisekedi was named new president, although there was doubt that he had actually won the election.

The Congo is deeply divided for several reasons: during the Belgian colonial empire, traditional kingdoms without natural contacts were forced within the same borders, during Mobutu’s dictatorship 1965–1997, the country collapsed with neglect, and finally several years of war created strong contradictions between different peoples and regions. The 1998–2003 war is one of the bloodiest conflicts in human history (see Population and Languages, Modern History and Social Relations) and has left deep marks. Although there is no war, there is still unrest in parts of the country and the democratic shortcomings are great. In recent years, the economic problems have also worsened.

Several armed factions never signed the peace agreement signed in December 2002 and a number of new rebel groups and militias have emerged ever since. Particularly troubled is that in the eastern provinces of North and South Kivu where the war began. The government’s uneducated, undisciplined and poorly paid soldiers – often sourced directly from various rebel forces under peace treaties and with the same command as then – are often as dangerous to the civilian population as the rebels. Hundreds of thousands of people have been forced to flee and thousands of children, women and men have been raped by soldiers from all sides in connection with the fighting in the Kivu region in recent years (see Social conditions). Unrest also occurs in Orientale in the northeast and in Katanga in the southeast. In the copper-rich Katanga, there have been separatist trends ever since independence. 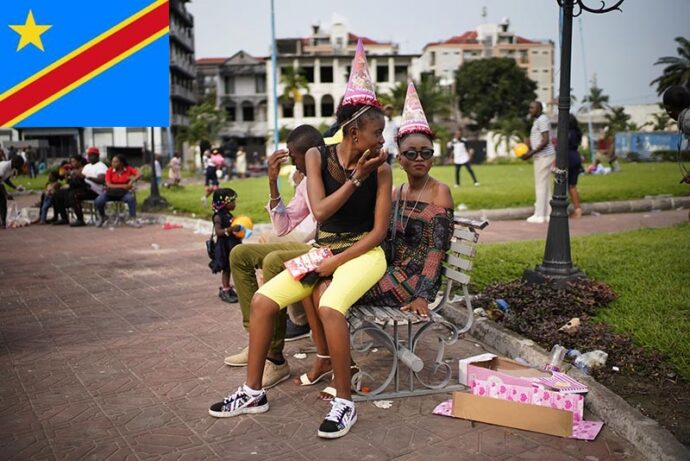 In 2016, a local power struggle in Kasai-Central triggered a wave of violence that spread to several provinces. At the same time, there were reports of new fighting in both North and South Kivu, where resistance to Kabila grew. At the beginning of 2018, information came that several of the militia groups in the east had begun to work together to form a united front against the then president. Some analysts also warned that growing dissatisfaction within the government army could lead to new jumps to rebel movements.

In November 2018, almost 4.5 million people were displaced in the country, which accounted for more than 5 percent of the population, and over 13 million people found it difficult to obtain food for the day.

The then President Kabila consolidated his power after the 2006 and 2011 elections, more due to the split of the opposition than to his own politics. Kabila could use its position to build a power base that no other leader or any party could match. Like once dictator Mobutu, Kabila and his family have also created a large private fortune through extensive business interests in the mining industry. Kabila could also play out parts of the opposition to each other. In retrospect, concern rose that he would not be prepared to give up power. Several signs also came to indicate that. The political climate hardened and the elections were postponed several times. In May 2016, the Constitutional Court ruled that Kabila had the right to remain in office even after his term expired if no election had been held.

At the same time, the opposition managed to agree. In spring 2016, the Alliance Collection was formed (see Calendar). However, the opposition had been weakened by the fact that one of its foreground figures, Moïse Katumbi, had been forced into exile and that many young Congolese regarded the opposition’s other strong man, Étienne Tshisekedi, who turned 84, as a relic of the past. The opposition’s attempt to challenge the government through street protests was turned down by force. In September 2016, some 50 people were killed in connection with demonstrations demanding Kabila’s departure. Another 20 or so casualties were required in connection with new protests at the end of the same year.

Some analysts said that neither Kabila had any major choices; that he was in the hands of those who had helped him to power, not least in the military and parts of business, who are not prepared to give up any of his privileges.

The opposition is shattered

Around the turn of the year 2016/2017, the Catholic Church succeeded in bringing forward a new settlement which meant that elections would be held in 2017, and that Kabila would be allowed to stay until then, but the process was stalled. It also became increasingly clear that the opposition was having a hard time keeping together. It also suffered a severe setback when Étienne Tshisekedi died in Brussels in February 2017. Since Katumbi was still in exile, the opposition lacked a unifying figure. Kabila’s camp was able to strike a wedge in the cooperation when opposition politician Bruno Tshibala, from one of the now three factions of the Assembly, was appointed new prime minister in May 2017.

In October 2017, the Election Commission, Ceni, which is considered to be close to Kabila, announced that no elections could be held until the earliest in April 2019. The following month, Ceni nailed that the election should be held on December 23, 2018. The new message probably came after pressure from the United States. At the end of 2017, new protests were held against Kabila, organized by the Catholic Church. They were brutally beaten down by security forces and several people were killed.

In June 2018, before the presidential and parliamentary elections, the government side presented a new alliance, the Congo Common Front (FCC). In August, Kabila presented the FCC candidate in the presidential election: former Interior Minister Emmanuel Ramazani Shadary, a hardworking and loyal employee of Kabila. However, he was relatively unknown in the country and is on the EU sanctions list for the human rights violations committed by government forces in Kasai during his time as Minister of the Interior.

Former Vice President Jean-Pierre Bemba, who was sentenced in 2016 for war crimes and crimes against humanity, but released by the ICC in June 2018 (see Political system) returned to his home country in July after ten years in prison and applied to be held in prison. presidential elections. In the same vein, Moïse Katumbi was prevented from entering the country. Bemba was mentioned as one of the few politicians who could challenge Shardary, but his candidacy was not approved by the Election Commission. The Election Commission justified its decision by condemning the MLC politician by the ICCfor bribing witnesses. A further five candidates, including several of Kabila’s former prime ministers, were removed from the list of candidates. However, two of them, Marie-Josée Mputa Mpunga and Samy Badibanga, were allowed to participate after the appeal. This meant that the two main opposition candidates were Félix Tshisekedi and Vital Kamerhe, who do not have the same strong electoral base as Bemba and Katumbi.

In November, however, the opposition seemed to agree on a joint candidate in the presidential election: the businessman and MP Martin Fayulu. But after only a few days, Tshisekedi and Kamerhe withdrew from the settlement, citing dissatisfaction among the grassroots within their own parties. Shortly thereafter, they formed an election pact, Towards Change (Cap pour le change: Cach), which meant that Tshisekedi would run for president and Kamerhe would become his prime minister if he won. Fayulu, for his part, was at the head of an alliance called Lamuka (Awake).

The election, which should have been held on December 23, was delayed for a week, citing problems that have arisen since the destruction of several thousand electoral machines in a fire. Despite other technical problems and fears of further delays, the elections were held as planned on December 30 (see Calendar). The result was delayed, but when the preliminary result came on January 10, 2019, it indicated that Tshisekedi had won the election. Fayulu, who had led the opinion polls, questioned the result. Tshisekedi’s conciliatory attitude towards Kabila fueled rumors that the two had concluded a secret agreement. At the same time, Kabila faithful parties appeared to have won a majority of seats in the National Assembly (no official result has yet been made public).

Faylulu appealed the election results to the Constitutional Court, which however rejected his appeal. Tshisekedi took office as President on January 24. He faces a number of urgent problems, not least how to deal with the frustration of those who voted for Faylulu and who consider himself stolen from the peace, while at the same time being able to work with Kabilas FCC in the National Assembly, take steps to tackle corruption and improve living conditions for the many poor Congolese. Among other things, he has promised better roads, better schools and better care and to give more people access to electricity.

It is clear that Kabila and Tshisekedi must have agreed to share power, but no one knows what such a deal looks like. Completely toothless is not Tshisekedi. In March 2019, the President ordered that the 700 political prisoners arrested under Kabila’s government be released, and the media is considered to be able to work in more free conditions than before. He also makes great efforts to gather contacts with the country’s most important donor.

A new government coalition between Cach and the FCC was finalized only at the end of August 2019. A large part of the ministers had close ties to Kabila, and it became clear what great influence the former president still has. Among other things, his alliance was given the important ministerial posts with responsibility for the economy and the mining industry. Up to two-thirds of the government consisted of people who had never held any ministerial post before.

Follow the ongoing development of the country in the Calendar.

Read more about the background to the Congo-Kinshasa conflict.

The International Court of Justice in The Hague (ICJ) orders Uganda to pay compensation to Congo for violating international law through the participation of Ugandan troops in fighting in the country in 1998–2003.

A new constitution is approved in a referendum, supported by 84 percent of the participating voters. 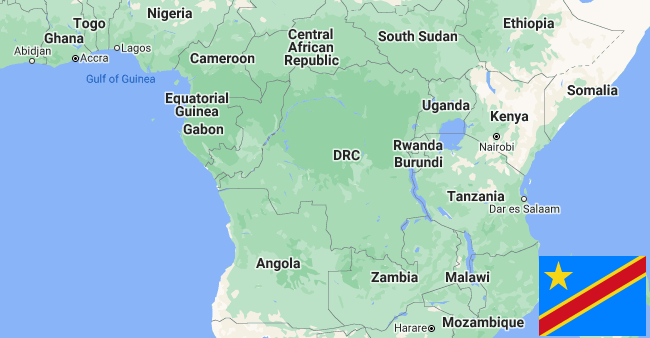