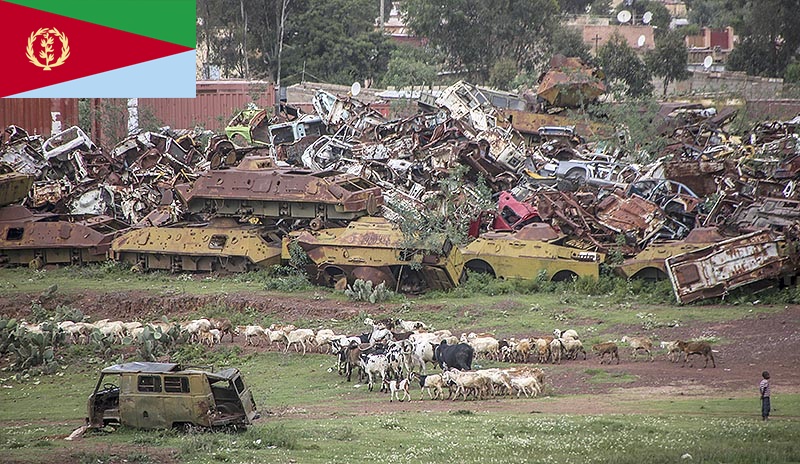 Eritrea is a country located in the region of Eastern Africa. See abbreviation for Eritrea. There were high hopes for democracy and development in Eritrea at independence in 1993. Instead, the country has come to be called Africa’s North Korea and is likened to a concentration camp. President Isaias Afwerki, who has been ruling since independence, has become increasingly authoritarian and, together with his allies, controls politics, the economy and the judiciary.

Politics is completely dominated by the People’s Front for Democracy and Justice (PFDJ), which originated from the previous liberation movement EPLF. PFDJ is the country’s only permitted party. No elections have been held.

After independence, the PFDJ abandoned its original Marxist-Leninist ideology and opened up to market economics. But after the disastrous war on Ethiopia in 1998–2000 (see Conflicts: Ethiopia-Eritrea and Modern History), the state again tightened its control over the economy. At the same time, the PFDJ developed an increasingly authoritarian regime. Since 2001, in practice there has been a state of emergency and all opposition to the government is silenced.

The Eritreans live under harsh conditions. The combined military and community service that all Eritreans are required to perform is often extended beyond the 18 months that would originally apply, and also includes people older than the age limit of 40 years. Many are forced to work long periods without pay, sometimes for companies owned by high-ranking military or party elite representatives.

One result of this is that Eritrea stands out for being one of the countries in the world that has created the largest refugee streams, despite not being at war and despite the population only being around four million. According to the UN agency, the UNHCR estimates that between 3,000 and 5,000 Eritreans flee their country every month (see Population and Languages). The peace treaty with the archipelago of Ethiopia 2018 (see Foreign Policy and Defense) has not reduced the refugee flow very much. Those who try to flee the country are at risk of being killed or imprisoned. 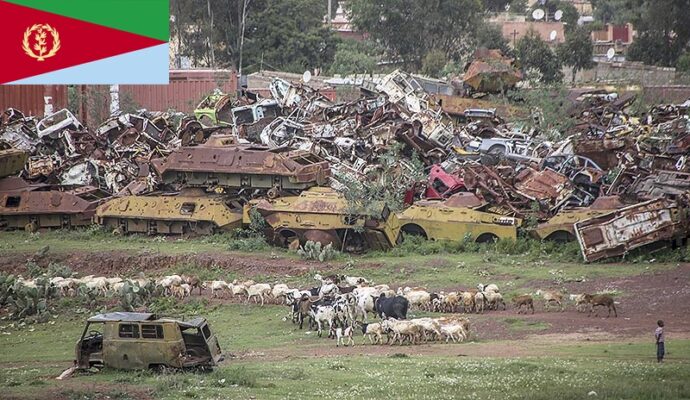 Eritreans abroad seeking contact with the country’s diplomatic bodies are forced to sign that they have committed treason, and promise to pay 2 percent of their income in “tax” to their home country – otherwise they will not receive any service and their relatives in Eritrea may have problems with authorities. Refugee smuggling is a profitable business and there are indications that high ranking regime representatives are involved in the smuggling.

Gradually, foreigners’ freedom of movement or the right to stay in the country at all has been limited, and foreign aid efforts have largely been stripped (see Financial overview). The government has often referred to external threats to explain everything from food shortages to long-term community service and missing choices.

The protests against the regime within the country have, as far as is known, been limited. This may be due to a mixture of fear of reprisals and that a lot of Eritreans accept the image that the threats necessitate the harsh conditions. Many people also cope with their livelihood – the lack of food is constant and becomes acute at regular intervals. Political opposition exists mainly among exile rites.

READING TIPS – read more about Eritrea in UI’s web magazine The Foreign
Magazine : Despite the newly ignited hope – pale outlook on the Horn of Africa (2020-06-04)

no choices have been made

The UN is facing sanctions

UN Security Council introduces sanctions on Eritrea, due to support for Islamist rebels in Somalia and aggression against Djibouti. The Security Council’s temporary member Libya votes against the decision, while China abstains.

A UN-appointed commission orders Eritrea and Ethiopia to pay each other damages for the 1998-2000 war. For Eritrea, it will be a “net loss” of $ 10 billion, but the government says it will accept the decision.

Human Rights Watch reports in a report that the Eritrean government is turning the country into “a huge prison”.

The UN Security Council notes that Eritrea has not withdrawn its troops from the border with Djibouti.

In a unanimous resolution, the UN Security Council calls on Eritrea to follow Djibouti’s example and withdraw its combat forces from the border area. 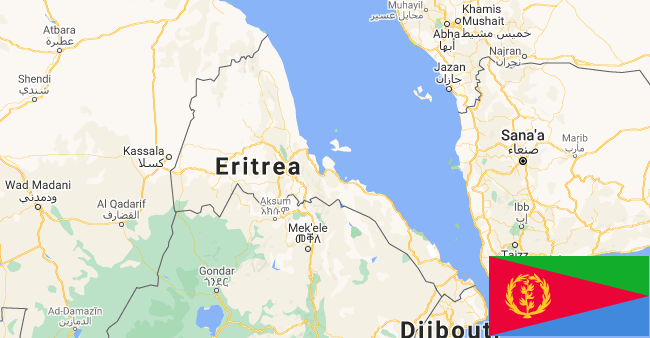