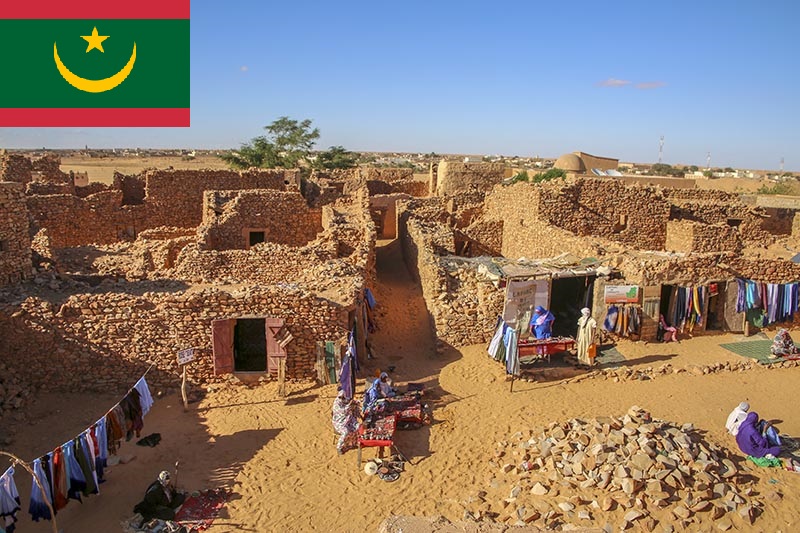 Mauritania is a country located in the region of Western Africa. See abbreviation for Mauritania. Mauritania was ruled over a decade by Mohammed Ould Abdelaziz and the Union for the Republic (UPR). The country’s economy became stronger during Abdelaziz’s two terms of office and the government fought hard terrorism in the country. In the 2019 presidential election, regime-backed candidate Mohamed Ould Ghazouani won. He seemed to be pursuing the same policy as the representative, which he soon renounced.

Abdelaziz took power in a military coup in the summer of 2008 (see Modern History). A transitional government was appointed and presidential elections were scheduled for June 2009. The opposition threatened to boycott the election, citing preparation time was too short. After talks in Senegal, representatives of the military regime and the opposition agreed to postpone the election for a month. At the same time, the parties agreed to form a national unity government. The so-called Dakar agreement also meant that the parties would together discuss issues related to changes in the electoral system and the influence of the army on politics.

The Dakar agreement also led the African Union (AU), which had excluded Mauritania after the coup and imposed sanctions on the regime, once again accepted the country as a member.

The presidential election was held in July 2009 and won by Abdelaziz, who got 53 percent of the vote in the first round. The next most votes were Messaoud Ould Boulkheir, who led the party of the Progressive Alliance (APP) of the Haratins (the Black Moors). In third place came Ahmed Ould Daddah from the Democratic Forces Collection (RFD). There were reports of widespread cheating, but the result was approved by the Supreme Court despite the fact that the chairman of the Election Commission left his post “for conscience reasons”.

After the election, Abdelaziz promised to address terrorism in the country, where the militant Islamist group al-Qaeda in the Islamic Maghreb (Aqim) is active. According to Mauritanian authorities, the group is responsible for a series of terrorist attacks, both against the military and against foreign nationals, sometimes with deadly consequences. Several Westerners have been kidnapped by groups suspected of having links to Aqim.

An anti-terror law that was passed in 2010 gave the security forces extended powers. In the same year, three people were sentenced to death for the murder of four French tourists in 2007. It was the first death sentence issued in the country in over 20 years.

In addition to the fight against terrorism, the government also promised to continue the privatization of state property initiated by previous governments, and to strengthen the tax system and keep wages and expenditures in the public sector.

At the end of 2009, several of the opposition parties chose to merge into an alliance, called the National Forum for Democracy and Unity (FNUD) or Coordination of the Democratic Opposition (COD). In addition to the RFD and APP joined in 2008, President Sidi Mohammed Ould al-Cheikh Abdellahi’s National Pact for Democracy and Development (PNDD), Progressive Forces Union (UFP) and Islamic National Assembly for Reform and Development (RNRD) joined the alliance.

A few months later, the ruling party UPR, which had been founded by Abdelaziz after the 2008 coup, formed a valiant alliance with ten other parties. 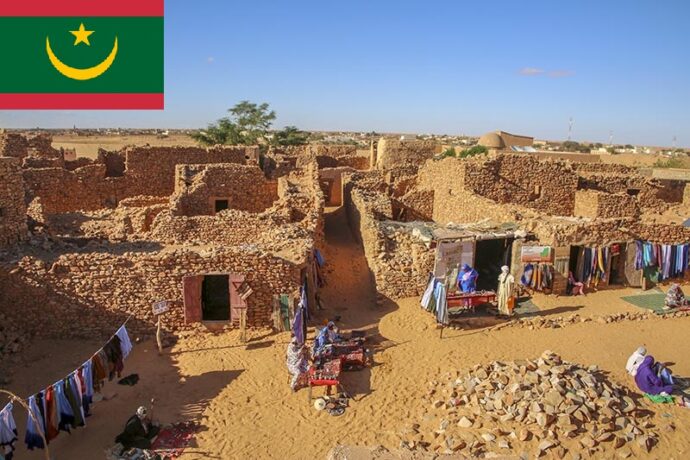 Strikes and protests took place in 2010 and gained momentum as popular protests against dictatorships in several North African countries swept across the region in early 2011. On several occasions, large demonstrations were held against the government, which then promised to hire more public sector officials, invest in work for young people and increase subsidies on food.

In 2011, the country was also shaken by demonstrations against, among other things, slavery. This led to violent clashes with the police and several people were injured and arrested.

The parliamentary elections that would have been held in 2011 were postponed several times but were held in two rounds at the end of 2013. The elections were boycotted for most of the opposition. The only party in the FNUD / COD that participated was the Islamist party Tawassoul, which was represented in Parliament for the first time. The UPR government itself won more than half of the mandate and, together with a dozen or so allied parties, received a total of 110 of the 147 mandates.

In June 2014, President Abdelaziz was re-elected with almost 82 percent of the vote. The grand victory was expected as most opposition parties again refused to participate, citing the lack of democratic conditions. Abdelaziz’s closest challenger was Biram Ould Dah Ould Abeid, head of the IRA-Mauritaine anti-slavery organization (see Political system). Ould Abeid was elected independent and received 9 percent of the vote. He appealed the election results, claiming that cheating and irregularities had occurred.

In early 2015, former presidential candidate Ould Abeid and two other anti-slavery activists were sentenced to two years in prison for membership in an illegal organization and participation in an unauthorized demonstration. The verdict was criticized by human rights organizations.

Slavery remains a contentious issue in Mauritania. Formally, it has been banned since 1981, but in reality it exists to a large extent (see Population and languages). In 2015, the legislation was further tightened, including a broader definition of slavery and longer sentences. Few judgments have been sentenced, but in March 2018, three people between 10 and 20 years were sentenced to prison for slavery, something that slave opponents saw as an important breakthrough.

President Abdelaziz made a proposal in 2017 to abolish the Senate and several other state agencies, and to change the country’s flag. He pointed out that the Senate was expensive and unnecessary, and said he wanted to strengthen “peace, security, stability and development”. The opposition was critical, claiming that the president planned to go ahead with the constitutional amendments in order to run for re-election in 2019, something that prevents the constitution. When the sitting Senate in March 2017 unexpectedly voted against the proposal, the president called for a referendum. The opposition decided to boycott the vote, which helped to approve the president’s proposal in August by a large margin.

The UPR won big in the general elections in September 2018. The ruling party gained its own majority in parliament, winning all 13 regional elections and in most municipalities. Hundreds of parties lined up with candidates, more than in any previous election. FNDU was also a candidate, unlike the 2013 election.

After the election, Prime Minister Yahya Ould Hademine was replaced by Mohamed Salem Ould Béchir. The Minister of Defense was also replaced, but otherwise the old ministers were allowed to remain.

The electoral movement was dominated by financial issues. The regime’s candidate Ghazouani sought support from voters by talking about the importance of continuity, solidarity and security. He promised to give priority to the country’s economy and internal security.

New president, some change of course

The presidential election was held under calm conditions. Ghazouani won with 52 percent of the vote, which meant a second round of voting was not needed. His main opponent, anti-slavery activist Biram Dah Abeidwho, received just over 18 percent of the vote, while former Prime Minister Sidi Mohamed Ould Boubacar came in third place. Both claimed that cheating had taken place. The Election Commission disputed this, but it was criticized by the opposition candidates for being biased. Mauritania had declined to accept independent international election observers. Following the opposition’s criticism of the elections, the authorities shut down the internet and social media. Soldiers were deployed to Nouakchott to secure the streets.

Six months after President Ghazouani’s election victory in June 2019, he seemed to have taken a firm grip on power. His former mentor, President Abdel Aziz, seemed to have been neglected. An attempt by Abdel Aziz to stay in power by retaining the post of chairman of DPR was halted. The heads of the president’s bodyguard were dismissed. In March 2020, four of Abdel Aziz’s political opponents returned to the country after a long period of exile.

Ghazouani became popular when he, as chief of staff, succeeded in keeping jihadist groups outside Mauritania, at the same time as neighboring Mali, for example, was severely plagued by Islamist violence. Ghazouani has strong support within the ruling DPR. In addition, several parties, including the opposition Adil, have joined his party alliance. Former Prime Minister Sidi Mohamed Ould Boubacar, who lost the 2019 presidential election, has also switched to Ghazouani’s side. 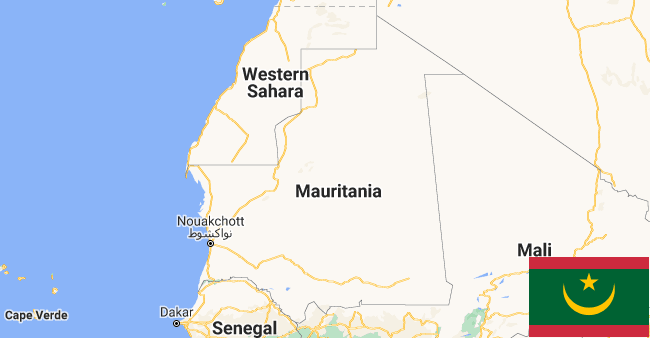