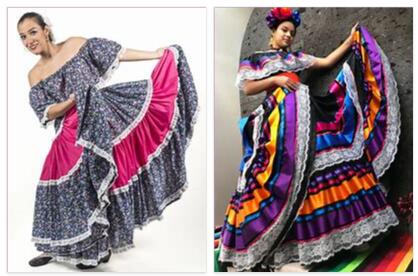 Clothing. – Mexicans generally dressed quite simply: men with a short cloak and another even smaller one, square, for the shoulders, women with a canvas skirt tight at the waist and drooping up to half a leg or more down and a sleeveless shirt. They floated shoes of aloe leaves or deerskin attached to the foot with laces. The fabrics were white, of agave thread or cotton, for the poor; for the rich, of colored cotton, woven with colorful bird feathers or rabbit hair and embellished with gold decorations. The men kept their long hair tied on their heads and girded with the tlalpiloni, down the shoulders of the women, save the virgin priestesses, who were shaven. Then they wore diadems of multicolored feathers, pendants, breastplates and necklaces of grains of gold or hard stones; gold or copper bracelets; special ornaments for the lower lip (tentetl) for the nose and chin, gold, crystal, obsidian. They painted their hair with xiuhquilitl juice, the teeth with the cochineal and the skin to traditional symbols by means of terracotta molds. They made great use of masks in religious ceremonies, dances and theater; they were generally of carved wood and decorated with mosaics or stone, deerskin and agave papier-mâché, scepters decorated with multicolored feathers, fly swatters and small oval or triangular mirrors of pyrite or marcasite and larger ones of obsidian.

Games. – The games were public, religious and private, Fr. ex. the race, the game of flyers, the shooting of the ball, especially pelota, in honor of the god Omecátl, for whom the Mexicans had a particular passion; the patolli, play reminiscent of the dominoes, the fillet and the game of dice; the totoloque, in which the tiles were represented by golden balls.

Dances. – The choreographic dances were called mitotes and could be religious and profane: generally danced in rows or in circles by numerous richly dressed dancers, marking the movements and steps with the shaking of dry pumpkins full of pebbles; often, in them, some, disguised as animals, imitated their movements and cries. In the dramatic dances, episodes from the life of heroes, hunting and war scenes were pictured.

Music. – The music was rather primitive, with percussion and wind instruments: the huehuetl or tlapanhuehuetl, a kind of hollow wooden cylinder one meter high, on which a skin was stretched, a kind of drum therefore, was played with the hand; the teponaztli, also cylindrical in wood, had two longitudinal tabs also in vibrating wood, on which it was beaten with sticks ending with rubber balls: it was in tune with the previous instrument forming the third and octave; the tambourine; the omichicahuaztli or notched bone, framed with a shell; the tzicahuaztli, made with a human femur; the ayacactli, the tetzilacatl, kind of copper gong; then the terracotta flute, fifes, ocarinas, whistles and shells to blow inside.

Education of children. – At the birth of the child, his head and mouth were bathed in order to purify him from the sins of his parents; fortune-tellers drew lots and feasted on it. He had slipped to three or four years and this date was also celebrated; every mother, with rare exceptions, had to breastfeed her child and, widowed or divorced, could not be remarried if she had not finished breastfeeding. If the baby was destined for the priesthood, it was offered in the temple twenty days after birth. The child remained at home until he was five years old, educated by his parents who treated him with affection, but with great severity; the Mendocino Code occupies several pages in describing the education of the Mexican child and is therefore a valuable pedagogical document. The patema authority was unlimited; children were inspired by the horror of vice, the obedience for parents, respect for old people, love for work. There was special care for the girls, who lived apart from the males and did not attend banquets until after they were married; sewing, spinning, weaving, embroidering and feather work, as well as housework, were their main occupations.

There were two kinds of schools: the techputcalli for the people, near the temples, where, under the guidance of priests, the children learned morality, religion and the little that might be necessary for their modest life for three years; and the calmecac, a kind of boarding school for the sons of the nobles who, even under the guidance of priests, also learned the arts, history, a little music and everything that suited their state. The girls had matrons for teachers. The discipline was very great and any punishments were severe. Typically, if the disciples of that institute were not married at 22, that meant they were embracing the priesthood.

Woman and marriage. – The Mexican woman enjoyed generally good treatment in the family. Marriage between first degree relatives was prohibited. The woman married between 17 and 18 years, the man between 20 and 22; the marriage was combined by means of mezzane (cihuatlauque) with long and complicated practices; the rite of marriage is picturesque, followed by a large banquet. Only after four days could the bride and groom get closer. The Mexicans were monogamous, except for the princes and nobles who could marry more women, but only the children of the first were legitimate. Adultery was punished for the most part with the death of the woman, less often than the man; divorce existed, but only admitted for evil deeds, habitual filth, sterility, impotence.

Funeral. – When the Mexican was dead, he was bathed with water, to remember the one given to him at birth; he was dressed like an idol, he was equipped with pieces of agave paper which were to help him in the journey beyond. His clothes and weapons were burned and a little dog was killed that was to accompany him on his journey to the other world. Often the corpse was cremated and the ashes buried in temples; sometimes instead he was buried seated on a chair with the tools of the trade or weapons, and at the tomb, for a few days, food and agave wine were laid. In the tombs of the nobles precious objects were placed; on the anniversary of his disappearance, a ceremony was held, in which he made sure not to mention his death.

The kings were burned with great and sumptuous ceremonial; while the pyre was burning, many of their servants, their buffoons and their concubines, who were to serve them in the afterlife, were killed. The anniversary of death was celebrated every four years. The first kings of Mexico were buried in the Chapultepec caves near the capital, later, in the great temple of Huitzilopochtli, near the idol of this god.