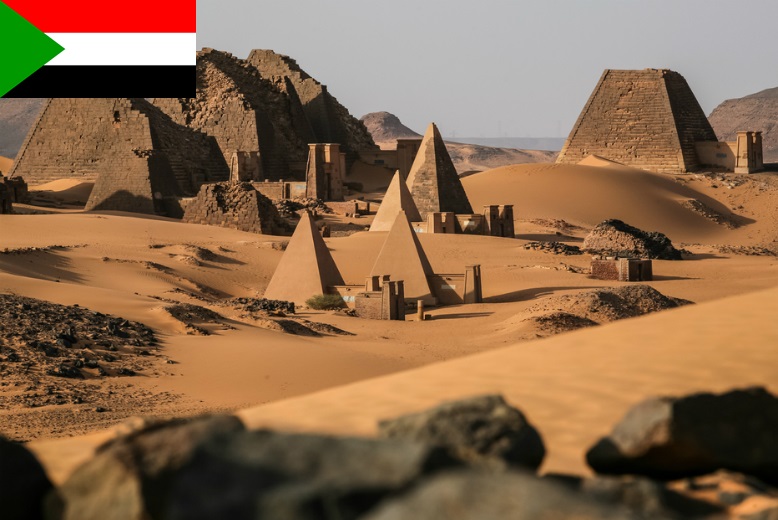 Sudan is a country located in the region of Northern Africa. See abbreviation for Sudan. In August 2019, a transitional government took office in Sudan, four months after the country’s authoritarian president Omar al-Bashir was toppled in a military coup after 30 years in power. The transitional regime consists of a civil-military council and a civilian government that will lead the country until the general elections in 2022.

Sudanese politics has been characterized by economic decline and social unrest since the country’s 2011 divide in Sudan and South Sudan (see Modern History). The two neighboring countries still have unresolved border conflicts between themselves (see Conflicts: Sudan-South Sudan). Sudan is also drawn with several internal conflicts, not least the one in Darfur in the west (see Conflicts within Sudan).

The 2010s were characterized by recurring mass demonstrations against the hard-line rule of the then President al-Bashir and against rapidly rising food and fuel prices when the increasingly poor state could no longer subsidize basic commodities. The country’s oil income fell sharply in the partitioning of the country, as most of the oil sources went to South Sudan (see Economic overview).

It was just such a period of nationwide protests that preceded the military coup that in April 2019 caused al-Bashir’s regime to fall. Violent popular protests against increased living costs erupted in December 2018, the same day that Sadiq al-Mahdi, leader of the opposition Umma Party, returned to Sudan after nearly a year in exile. 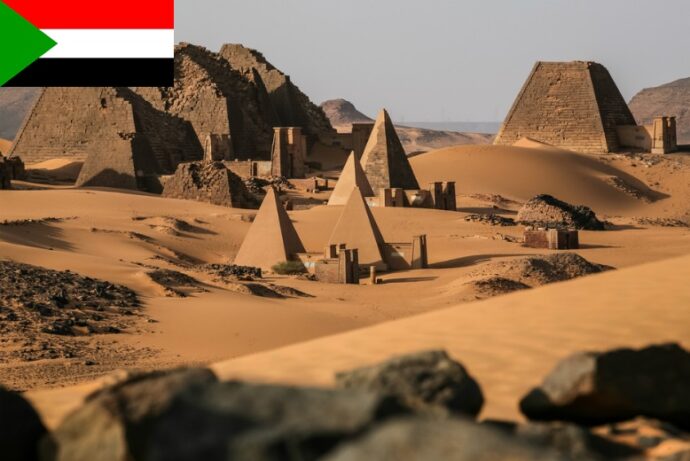 The street protests began in Atbara in eastern Sudan, where protesters set fire to al-Bashir’s power party NCP’s office in the city. The protests then spread and soon reached the twin cities of Khartoum and Omdurman where they increasingly became the nature of regime-critical demonstrations. Eventually, demonstrations were held in several places, for example in the south and in Darfur.

At the end of January 2019, authorities reported that some 30 people had been killed in the protests, while Amnesty International estimated the number of dead to at least 40. The government responded to the troubled situation in the country promising “real reforms” and dismissing a minister, but the Above all, the protesters met with tough police action.

The protests had popular support, but were organized by a group of highly educated people within the SPA (Sudanese Professionals Association) movement. SPA was formed in 2012 by about 200 teachers and lecturers at the University of Khartoum after the adoption of a new law restricting the freedom of political parties. SPA soon emerged among teachers at other universities and in professional groups such as doctors, lawyers, veterinarians, engineers and journalists.

During the 2018/2019 demonstrations, SPA was given a clearer political role and made demands on Bashir’s departure. The SPA was supported by several political parties, including the Umma Party, whose leader al-Mahdi openly demanded the resignation of the regime. Eventually three guerrilla groups joined political factions.

An emergency permit is introduced

When the protests became nationwide, on February 22, 2019, President al-Bashir introduced a state of emergency throughout the country for one year. He thus gathered power around himself and the military leadership. al-Bashir dismissed all but five ministers, among those who remained, were the Foreign, Defense and Justice Minister. The president also dissolved all 18 state governments and appointed 18 new governors, 16 of whom were military commanders and two were from the intelligence service.

Two days later, al-Bashir presented a new transitional government. The Minister of Defense, General Awad Ibn Auf, retained his post and was also appointed Vice President. In doing so, al-Bashir dismissed his close ally Bakri Hassan Saleh from the important post. Prime Minister Mohamed Tahir Ayala, former governor of the state of Jazira. In March, Ayala formed a new permanent government with 20 ministers. The Minister of Defense was allowed to remain. The government’s main task was to get the economy on its feet. The Ayala government was the third in two years that al-Bashir appointed with the same main task. The previous two were kicked when the president became dissatisfied with the result.

By that time, the regime’s resistance had merged into the broad Alliance for Freedom and Change. Regime-critical protests were carried out despite the state of emergency, albeit to a lesser extent. Data on the number of deaths now ranged from around 30 to over 50.

On April 11, 2019, Minister of Defense and Vice President Awad Ibn Auf announced in a televised speech that the military was taking over power in the country. President al-Bashir was reported to be deposited and placed in detention “in a safe place”. Prime Minister Ayala’s government had also been ousted. A military council, led by Awad Ibn Auf himself, had been formed and intended to lead the country for two years. After that, general elections would be held, Auf announced. He added that a three-month state of emergency had been introduced, that the constitution was repealed, and that the border crossings and the country’s airspace were temporarily closed.

However, the protesters were urged by their leaders to remain on the streets until a civilian government was set up. They obeyed the invitation and defied the army’s order for a nightly curfew. From the outside world came a series of calls to the military council to release a civilian government.

The continued pressure from the protesters, the opposition and the outside world forced Auf, who was closely allied with al-Bashir and strongly associated with the deposed leader, to resign as leader of the military council after a day. He was replaced by another general, Abdel Fattah Abdelrahman al-Burhan, who had kept a lower profile under al-Bashir.

Burhan promised respect for human rights and an end to the nightly curfew. He pledged to release political prisoners, dissolve provincial governments, prosecute anyone who killed protesters and launch a fierce fight against corruption. This was not enough for the protesters’ leaders in the SPA. They demanded an immediate transition to civilian rule.

The military strikes against the protesters

A day later, the military council backed further, announcing that the opposition and the protesters’ representatives would be able to appoint a new “independent” head of government and a new civilian government. In addition, the country’s army chief and national police chief would be replaced. All media restrictions and all censorship would be abolished. Police and security people detained for standing on the side of the protesters would be released.

The Supreme Council would replace the military council, but the parties disagreed on what powers it would have. In addition, the protesters’ leadership wanted armed rebel groups fought against al-Bashir to take part in the transitional regime, something the military did not agree with. The military, for its part, insisted that Islamic Sharia law should continue to form the basis of the country’s legislation.

After the negotiations stalled, the military and regimental militia went on June 3 and broke up a large demonstration outside the army headquarters in Khartoum. Dozens of civilians were killed and around 500 injured in the campaign, condemned by the UN, the US and a number of European countries, among others. The AU chose a few days later to exclude Sudan until further notice.

The transition regime agreement was annulled by the military. The demonstration leadership called on the Sudanese to take part in a “total civil disobedience” campaign to overthrow the military council. On June 9, more militants were killed by militia and the death toll was now reported at 118, according to a medical organization with ties to the protesters. Authorities admitted that 49 civilians were shot dead at protesters’ camps in Khartoum.

Later, the protesters’ umbrella organization “Forces of Freedom and Change” stated that at least 127 people were killed in the strike, while police indicated that 85 were killed and 239 injured between June 3 and 12 in Khartoum.

The AU, the US and several other countries tried to mediate between the parties and in mid-June the protesters’ leadership and the military council agreed to participate in indirect talks via the foreign mediators. At the same time, the military council lamented that “mistakes were made”. The protesters’ leadership blew off the campaign for civil disobedience.

A transitional regime will take office

Finally, in August 2019, the Military Council and the protest movement’s representatives signed an agreement, the so-called Political and Constitutional Declaration, which paved the way for a transitional regime in which military and civilian forces co-operate. The agreement provides for a governing civil-military council to govern the country for a transitional period of three years, together with a civil, technocratic transitional government (see further Political system). A fully civilian government is to be elected in general elections 2022.

The Governing Council took office on August 21, with the departing Military Council leader General Abdel Fattah Abdelrahman al-Burhan as continued leader. The economist and UN diplomat Abdalla Handok were elected prime minister of the transitional government. In early September, he was able to present his transitional government.

In November 2019, the transition board decided that al-Bashir’s old power party NCP would be banned and dissolved, and that the state would seize the party’s assets. A ban on NCP had long been a demand from the protesters.

The same month, the leaders of the military coup were indicted in 1989. At that time, President al-Bashir was already placed in a high-security prison, charged with corruption. In December, he was sentenced to two years’ house arrest for bribery. Al-Bashir had then also been charged with being ultimately responsible for students being killed by militia during the demonstrations that led to al-Bashir’s fall.

In the spring of 2020, political change work largely stopped when the country was reached in March by the pandemic caused by the new corona virus. Sudan introduced an emergency permit and closed its borders to the outside world, with the exception of the introduction of humanitarian aid. Measures were taken to try to prevent the spread of the virus.

The transitional government quarantined Khartoum when it became clear that the infection was still spreading. The town was closed down and only necessary shops and service establishments were kept open. Residents were encouraged to stay at home and transport to and from the city was kept to a minimum.

Read more about the border conflicts in the south here.

46.4% in the 2015 presidential and parliamentary elections 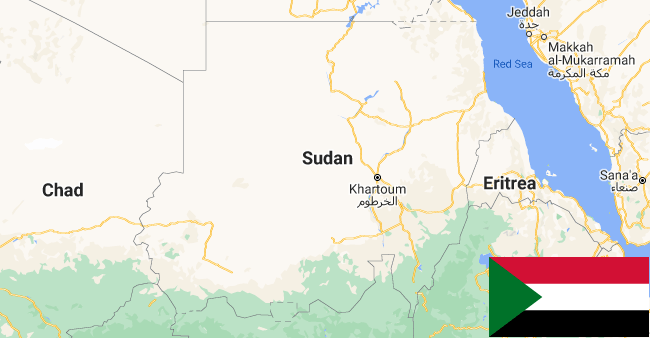